Another Great Read from the Desk of Mr Tom Ryan:

It was with sadness I witnessed the demise of my trusty Trek last Saturday 18th February on the NCC Inbetweeners Spin through the Curragh. I purchased Winnie as a second hand bike some time in my late fifties and to me, at the time; it was a thing of beauty. The pedigree of the previous owner is now lost in the mists of time. All I know is that he was a racer, and the purchase was a step down in use for the bike. Looking back on my  twelve or thirteen years as owner, it does not seem that long, in the scale of things, however it spanned more than a decade of my life, as it stretched from my fifties, through the sixties and into my seventies. In between there was a short dalliance with a Boardman bike, but this came to an end shortly after I was upended  ignominiously one Sunday morning on a club spin around the Blessington Lakes. And then approaching my seventieth birthday my family presented me with a shiny new Trek Madone bike. As a result Winnie was relegated to the second division, thus serving as my winter bike. I have to admit that as the age of the bike increased, and that of the rider in equal measure, the quality of the many replacement components decreased, in inverse proportion. A bike-fit in later years resulted in an ugly looking extension piece being added, to raise the handlebars above its design height. Then as the paint started peeling from the frame, it was as if my bike was suffering from a severe bout of road rash.

In this decrepit state who would blame her last Saturday when she emitted loud groans on the Newbridge to Kilcullen Road. Some of the group thought that it was the rider’s bones creaking with age, but it was correctly diagnosed by Colm Alley as a failing bottom bracket. Winnie picked her spot well; it was just on the way up to the house reputed to be owned by the presenter of the onetime RTE series “Show Me the Money”.  Later, on reaching home, a cold assessment of the situation would reveal that to restore Winnie to a shadow of her former self would not be cost effective, and so she would have to go!.

I might add that up to and including her final days she served me well, and bravely bore all the indignities bestowed on her. On her last day she got a Strava PB (Personal best) for Beggar’s End – Naas Sprint. She also completed approx. 1,250 km (178 km per week) of biking in the current year.  It was a sad ending, as her front chain-wheel wobbled from side to side, as we climbed up Broadfield hill together, on her last journey home, after Saturday’s cycle. Under such circumstances who could be so cruel as to consign her to the refuse heap. 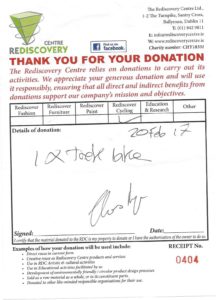 Not being one for long farewells a quick call on Monday morning to the Rediscovery Centre in Dublin established that it was based in the old central boiler house in Ballymun. As I passed through the toll point on the M50 the die was cast, there was no turning back at this stage. Surprisingly the Rediscovery Centre was alive with people milling around, tea and coffee was being served, as some event or other was about to take place. It added vibrancy to the centre, and as I left after handing over my old friend, and clutching a receipt I had received, the docket represented to me not a death but a rebirth cert. And so 11:30 am in the morning the deed was done, and  as I headed for home looking forward to my next Winnie or whatever name she will be known by, the words of Bon Jovi started going through my head “The more things change the more they stay the same”.

About the Author: Gary Coulahan