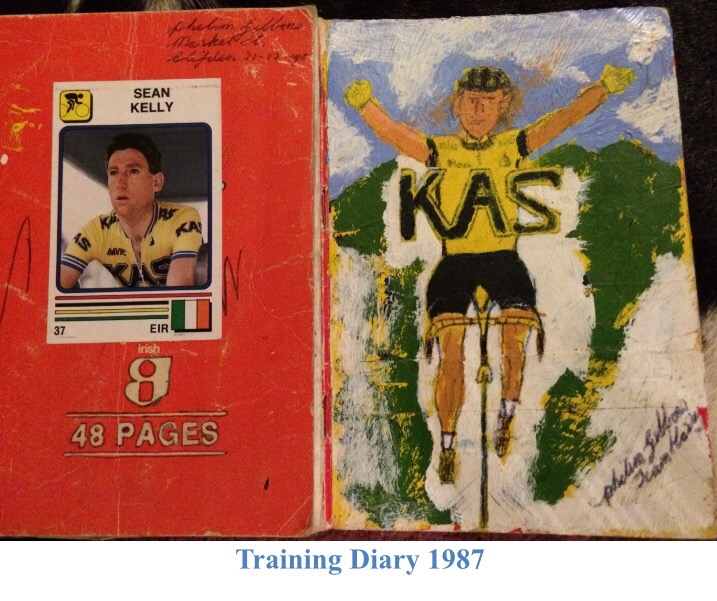 January had gone well and we were now in to February of that unforgettable year of 1990. The steady miles on the small ring were now being augmented by the prospect of pushing it out a bit and speeding things up. One enters the Spring full of anticipation as the evening stretch. Time to go “faster and further” as Phil Ligget would say. The Junior Tour is the target.

Our thing, John and I, was to meet on the Friday evening after school and discuss the training plan for the weekend. It could be his house or my mine. It didn’t matter where. The training diary would be consulted and a route picked that meet our requirements. Our mothers would have the tea prepared; usually a barrel of the scalding type washed down by tarts or the sweetest and soggiest of Mary’s World famous current cake. “Have ye your homework done?” “Ya”. Pure lies. We were spoilt. When our plans were decided we would then settle down for the night in front of the TV and watch videos of the races we had taped from the previous year. That was fantastic. Imagine a cold winter night sitting up watching again Roche on La Plagne, Delgado on le Puy de Dome, Kelly and Vanderarden on the Mur de Grammont, Bontempi and Van Poppell on the Champs Elyse, Hinault and Lemond on Alpe d’Huez or McCormack and McQuaid in the Rás. Around midnight I’d hop on my bike and ride home under the streetlights and dream that I was each and every one of those “magnificent men on their flying machines”.

The plan for this weekend was the Maam Valley on Saturday, a tough and scenic 64 miler followed on the Sunday by a 2 hour 40 miler through Cashel and Roundstone and flattish. The weather forecast was windy and showers, the arrival of Spring.

Saturday morning arrived gloriously. It was bright, very cold and made lovely by that washed sunlight you get after heavy downpours. We were riding for nine o’ clock. What gear had we? I had a 21 and three quarter inch Daccordi SLX frame with a full Shimano 600 Groupset and Campag Croc Daune Clips with Binda straps. My brake cables were now concealed after avoiding this fashionable trend for the previous 3 years. The livery was a mismatch of Sidi and Santini with a snug PDM wool hat and “Shackeltonian” woolly gloves. John was similar but had a 23 and a half inch Battaglin frame, the same as Roche’s Triple Crown bike. This was one of the most beautiful frames ever produced. To this day, I have a signed poster of that famous bike (Roches’s not O’ Halloran’s) hanging on the wall of our kitchen on the Curragh and dominating the dinner table to the “delight” of my wife.

There was a strong tailwind. The roadman learns bitterly that a tailwind can be a devilish seducer and a strong one a heartless Casanova. Tail winds hide the cold and the speed provokes the ego. We flew out the Westport Rd and succumbed early to higher gear selections as an Atlantic gale (as it turned out) propelled us through the valleys of the Twelve Bens and Maam Turks. We went out too fast. You feel the bike is hardly even on the road which shines up greasily from the drenching downpours. The bike aquaplanes microscopically. If you’re a decent bike handler such roads present the opportunity to access your skills, your nerve and your buddy’s. A wet descent at 45 to 50 mph is a thrill that the cyclist truly loves especially if it’s negotiated without utilising those horrible things called brakes. We went out too fast.

The Maam Valley was unforgettable, a series of sharp, small climbs one after another with the two of us pulling hard in subtle defiance of the fact that we were riding and training together. This is allowed but only just. It is psychological half wheeling and can only happen between trusted friends. “He’s going well”. “So am I”. “I’ll show him”. “I’ll go up the gears”. “I’ll change down and peddle”. “He’s flying up this hill”. “He’s powering up that climb”. “Is he really a wheel sucker?” “He’s supposed to be my buddy”. All this cogitation ably abetted by pain, the Modus Vivendi of the bike rider. Out of Maam village there is a long drag, a tester but not a killer, the kind of climb where you can make it happen, make it hurt. We both powered up and sprinted across the top. We went out too fast.

The view beneath was fog and bog and the descent was taken smoothly and within ourselves. Maam Cross was at the bottom and then a right turn for a 25 mile spin home. The clouds opened to let in light but closed again as rapidly down the 2 mile descent. This was dark cloud though. Cloud full of spiteful rain and doomsday hailstone, a harbinger of difficulty, a reminder of weather’s inhumanity. We turned for home.

In to a storm. Within seconds we were in the low gears and we are on the flat. 42 x 19, 20, 21. What’s going on? We were doing “bit n’ bit” but only at 8, 9 or 10mph. Then the hailstones arrived, viciously pelting and bullying us. We had turned in to hell. The rain cascaded down, a dense, sheeting, icy clobber. We got soaked and were caked with slivers of frost. Frozen wet woollen gloves killed our morale. Riding on labouredly for an eternity we made little progress. Cars coming up comforted us with their warm petrol backwash but that was fleeting and also delusional. It’s only February and we haven’t enough miles in the legs to sustain this suffering. We are in big trouble

Racers tend not to stop when training. Coffee only comes at the start or the finish. But a decision to stop was made. We would get to Paddy Festys in Recess, there get to our friend’s house and be rescued. But this was another 10 miles away. “I must go on, I can’t go on”. Alas, a “damned defeat” was made. We pulled in at the side of the road and fell off our bikes. Shelter was provided by a hole behind a small quartzite outcrop. Huddled and miserable blowing in to our hands I was left to thinking or possibly hallucinating about Alan Peiper and how this young Australian rider in the seventies lived with the legendary Plankeart brothers in Flanders and how they would ride all day in the big ring in February covering 150 mile and sweeping the snow off their noses at the end of a 7 hour ride, laughing. And here were we dying in a trench, what wimps.

A distant lorry commenced its Doppler effect. We crawled to the roadside. “He could take the bikes in the back; he could take us in the back.” He could save our lives. He didn’t, he drove on. John threw his bike down on the ground. “You’re dead, you are dead. When I see you in Clifden I’m going to f***ing kill you and then I’m going to f***ing kill all your family, you fat f***”. The expletives lingered in the freezing air offending only the Connemara Hill Lamb. I silently agreed but was too cold to speak. Despair was about to set in when a chink of sunlight warmed us by half a degree. It was our burning bush on the N59. We stumbled on to our bikes and crawled our way to Joyces in Recess.

This was our classmate Mark’s house and we were warmly welcomed by his wonderful parents who gave us tea and warmth and love and kindness and advice and more tea and cake and a walk around the beautiful house. Kevin, Mark’s father even let me in on his elaborate new betting system that was 100% certain to beat the bookies. I doubted it and it was somewhat ironic and fun to be discussing probability theory after we had “diced” with death back the road. We got going eventually and were much obliged for that safe harbour.

All I remember after that is approaching town where John turned left for home and I went straight on. Not a word said. My mother’s greeting after I got in home still makes me smile. “Where did ye go today? The bike was thrown in the hallway as the stairs opened up in front of me. The final lines from the great Richard Murphy’s poem Sailing to an Island seem appropriate.

Later, I reach a room, where the moon stares cobwebbed through the window. The tide has ebbed, boats are careened in the harbour.

Here is a bed. 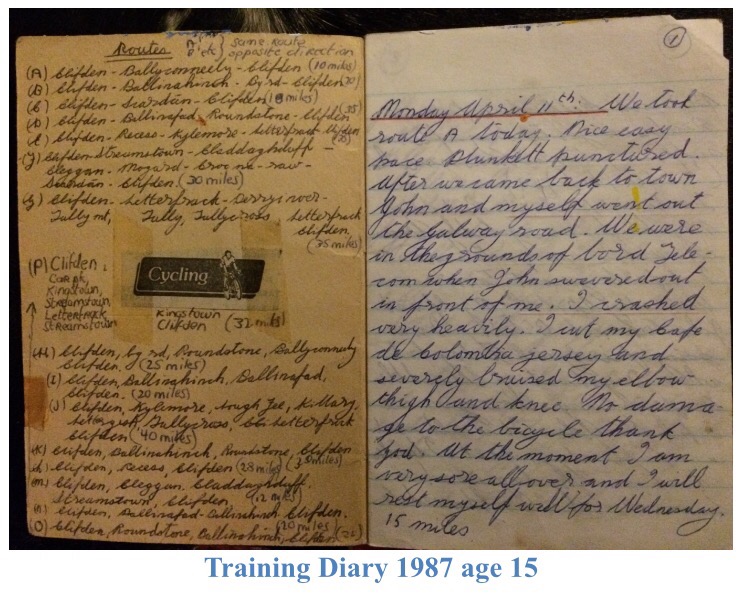