Gabriel Howard, Legend, Gentleman and one of a kind – RIP Gaybo

Gabriel Howard, Legend, Gentleman and one of a kind – RIP Gaybo

“In 4th place, a great old man of the road, who’s still a young man, as well as being a great friend of mine. A man of the Rás, a Connaught man and not long going to be an A4 man – John O’ Halloran”.  That was Gabriel Howard last Summer at the Stamullen Grand Prix. John (one of my best friends) is an old roadman who returned to racing last year.

How shocked we were to hear of the death of Gaybo last Friday. A veteran of over 20 Rásanna. Imagine that. A great way to irritate him was to mention” that I’d heard you’d  ridden 10”. He would go mad. I think that he rode 24. In his day he was a very strong rider, renowned for aggression physically and verbally. When he stopped racing he gave a lot of his life to cycling administration and organisation at all levels. He gave much back to the sport well recognised by the outpouring of tributes to him since this dreadful accident.

The Rás is Ireland’s greatest race. Gaybo was synonymous with it. His legendary Meath accent was stereotypical – the strongest on record in my view. He could distil the complexities of a bike race pithily. “He’s going grand, but he’s not riding”. “It’s fast and slow and he’s a specializer at that”. “Any idiot can climb but can they go down the other way”. Those unfamiliar with racing will find such expressions somewhat curious perhaps. Racers will know exactly what I’m on about. I’m smiling now thinking about him.

Our first meeting was 30 years ago in Clifden at stage 2 of the 1988 Rás. John McQuaid won the stage outsprinting Paul McCormack. From there in these two riders fought it out all the way to Dublin with a very controversial finish that remains so. John and I had for the previous few days filled in potholes and marked dangerous corners for what is now called a “technical finish”. When were they any other way? At stage end, I nabbed the great man (Gaybo) from neutral service and told him the job of work us two 16 year olds had put in, in preparation for stage arrival. How green we were? how innocent? “Fair play to yews lads”. We got introduced to the star riders and collected piles of gear. Caps, mits, jerseys, tubs you name it. Those Tommasini frames of the Irish squad sill a vivid memory with an oversized one ridden by Stephen Spratt, a complete eye opener. We told Gaybo later that we’d see him at the Rás as riders soon enough. John did, I didn’t – injury catching me out in 1992. Never got to be one of the men of the Rás.  Still the biggest regret from my racing life. Declan Lonergan won the stage in to Clifden in 1991 (a brave ride in to the wind on the Galway road for the last 15 mile) and there again we reacquainted ourselves with the Stamullen man. John rode the”Big One”the following year and I was injured. Alas.

Gaybo was a busy man with a vast memory. I last met him at a rather unpleasant special Cycling Ireland meeting in 2013. He remembered me after many years. It was great. This meeting was convened in response to UCI President Pat McQuaid’s handling of doping allegations in the Armstrong and post -Armstrong years. I was only in Naas CC a short while so I attended the meeting on my own “bat”. I knew there would be plenty of old friends there for a catch up. Many of us were fraught with anxiety that day and there was resentment in the air. I stayed quiet. I regret that now. Gabriel never stayed quiet.

In 1972, he was part of the infamous alternative Irish (NCA) contingent that arrived at the Olympic road race in protest at the (ICF & NICF) representation on the Irish team on the day. He was unapologetic about his role in the protest believing that it was necessary to assert the NCA’s right to international competition regulatory denied to them at the time. This argument bedevilled Irish cycling and athletics for many years. The healing process was complete by the time I started racing in the 80s but there were always lingering feelings that you knew were there. Kieron McQuaid, Pat’s brother rode for Ireland that day in Munich. I didn’t have the courage to ask Gaybo how he voted. Pat told me later that all of the old timers supported him but the younger crowd didn’t. Who were the old timers that voted for whoI wonder? The intersection between politics and sport is a big issue and always will be. Those who talk of its separation are in serious need of a history lesson and indeed a reality check.

The reality now is the tragic death of someone who gave his life to cycling in Ireland. Gaybo has gone up the road “attacking again sure he is sure”. The county system of representation that he so gloriously represented since the 1960s has been hallowed out in furtherance of professionalism and categorisation.  So be it. I’ll leave the last word on Gaybo to my brother roadman, John O’ Halloran, sorely grieved but now A3 as predicted. “He saved a lot of lads in the Rás over the years”. 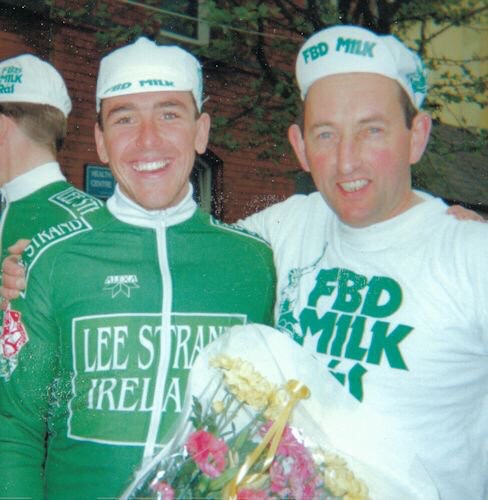