Today, on John’s 70th Birthday, it’s only right and proper to pay tribute to this wonderful man. I’ve only known John 6 years and in that time my admiration and respect for him has grown enormously. It continues to.

I first meet him on a cold January morning back in 2013, the 23rd of the month from memory. My great friend and colleague from Army days, Tom Keenan, had advised me to show up at the courthouse in Naas where someone would look after me. That someone was John. He asked me had I ever cycled before? I told him that I did a bit of racing back in the day and was looking to get back in to cycling. I had a shiny new bike and received a few furtive looks for lack of mudguards which unnerved me not a bit. I still get these looks the odd time. Anyway, John said I’d be grand and off we went to Allenwood and back. It was great even though I was bollixed by the end of the ride. I had had heart trouble and was a little nervous but the consolation of having finished (always finish) boosted the morale no end. Since then, thousands of miles later, morale is always high when out on the road with the intrepid C Group.

John is a superb cyclist. To me, like Tom O’ Hanlon and Tom Ryan, he is what you’d call a “lost racer”, one of those guys you know within minutes when you see them on the bike, riding with that appreciative awareness of form, movement, momentum, terrain, coherence and cohesion that the racing game would have been no bother to them. So much of cycling is instinct and its lack of often consigns one to the proverbial ditch. The Captain is a “rouler” who loves purring through on the big ring and would stay out there at the front all day. His style is exemplified by a smooth, shoulder rolling with the bike frame pitching gently left and right through a solid axis. Always out on the hoods even when descending (which he does brilliantly) there is a sense of contentment in the way John cycles. Some riders are at war with themselves on the saddle, not our John. His, is a harmonious relationship with the bike. So much so, that disgracefully, he actually gives his bikes names. Resist Félim resist, this is tribute not admonishment. I digress. To follow John on the road is to learn how to ride a bike. As a boring old roadman, hack, fusspot, dreamer, delusional wannabee Classics winner, I can think of no better tribute to John than this. He has safely minded and nurtured generations of cyclists for over 30 years and still does. He is owed much.

Many of us were in awe of this piece of Belfast Granite on the slopes of the Ventoux last summer. Well behind at Chalet Reynard, he slowly and determinedly peddles into view to our complete delight and joy. At the summit, we wait, we watch and we see. He swiftly cuts the last corner and makes the final ascent to the famous, windswept, volcanic observatory. To have witnessed that glorious moment is to have partaken in part of life’s mystery. Yes indeed, in the words of Tom Simpson’s daughters “There is no mountain too high”. 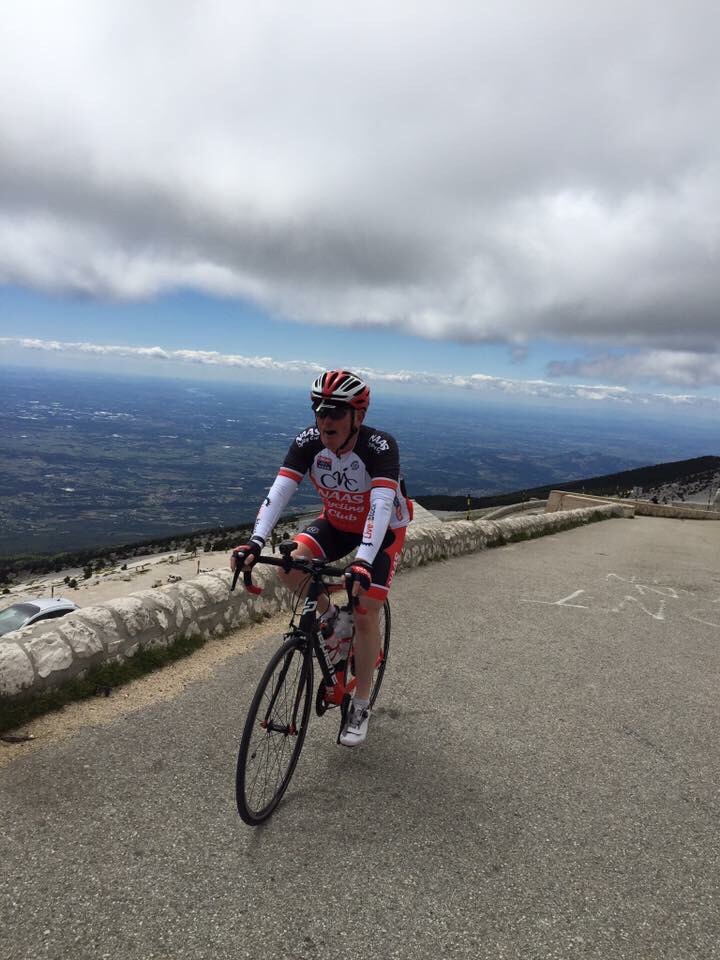 He rides the roads of Ireland in remembrance and defiance of life’s precious fragility. The Cycle Against Suicide. He helps with the punctures, the mechanicals. He provides the soft word in the ear to the sore body when the hard road occasionally comes up for a greeting. He’s the last man to leave the party and is a loyal and considerate roommate. I’m not. He talks in his sleep and snores. A meticulous organiser, a natural leader, a fabulous writer, a class rider and as nice, decent, kind and pleasant a man that you could ever meet on God’s Earth.

Salutations Sir on this your birthday. We all think the world of you. Long, long may you ride your bike. “What about you” and let’s raise a glass to Suncroft and beyond.